What is this blog about? In a nutshell, it's about black and white darkroom photomontage. Every few weeks, a new image with a few words about it, kinda poetic, philsophical.
For more details - check out the archive, the first post, April 26, 2015.
If you like what you see here, go to: www.bobbennettphoto.net 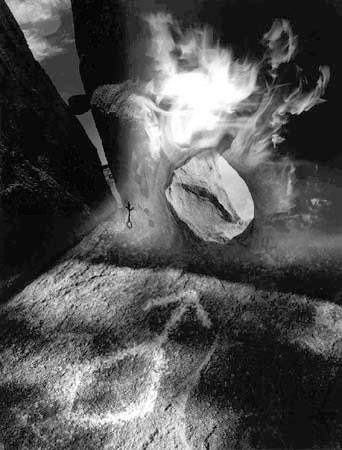 A petroglyph points to a portal, a burning hole in a rock wall, a most perplexing phenomenon. When's the last time you saw a rock burning? I guess that might be called something resembling a volcano? Beside this portal is a break in the stone, a chasm between huge slabs of rock, in which a smaller rounded rock has become stuck in it's descent, trapped. 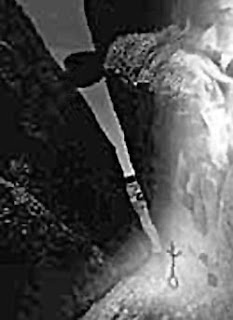 There's a small symbol at the bottom of the crack which means....?
What a contrast here - one rock is trapped, another reveals the distance.
Perhaps this is a geological version of the age old question - is the glass half empty or half full?
Posted by CaliforniaSilverwizard at 9:36 AM No comments:

CaliforniaSilverwizard
A traditional darkroom photographer who manages to survive reasonably well in a digital world, the "silverwizard" lives just north of San Francisco,California. He pays most of the rent by pushing pixels, and spends whatever time he can at the beach or desert. He still gets into the darkroom from time to time - it's the best fun you can have with your clothes on! For more on my techniques: http://www.bobbennettphoto.net/DarkRm2/index.html